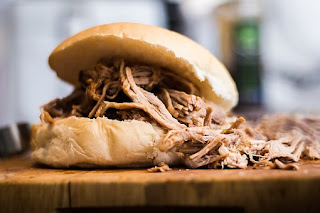 If you did not know, I live in North Carolina. North Carolina is known for their pork barbecue, although where in the state you are, how to make it can start a debate. Here in Carolina there are two kinds of  'Cue. You have vinegar based and tomato based. The further east toward the beach you get, the more vinegar based the 'cue gets and the further away from the beach, the more tomato based you get. I personally like both, but I am partial to the vinegar based 'cue. There are a lot of barbecue places around this state and everyone makes theirs a little different. Usually it is the sauce, which can have more spice or a different mix of spice added to the vinegar, but sometimes it is how it is cooked. Some places cook with wood to add a smokey flavor to the pork. Others slow roast without the wood.


After eating it as long as I have lived in NC and having been behind the scenes at few of these places and seeing how they make their 'cue, I was always a bit intimidated by the length of time required to make good barbecue. I finally got past that and decided to make some of my own one day after seeing pork butts on sale at the store and trying to figure out how to do make barbecue without having to spend 12 hours over a smoker. I was struck with the thought of using my old friend, the slow cooker. I am fortunate enough to have the largest one I have found available, a 7 quart cooker. Having 8 kids requires a large cooker to have enough of anything to feed us all. I found that a 8-10 pound pork butt (also called a Boston Butt or pork shoulder) fits into a 7 quart slow cooker 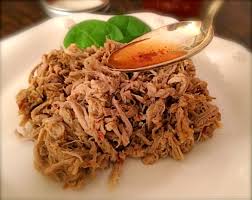 After seasoning the butt and putting it into the cooker and letting it go on low for 8 hours, I had a pork roast that simply fell apart, the sign of good barbecue. Here in NC we also have different style of serving the 'cue- either chopped or shredded. The chopped is literally the meat deboned, defatted and deskinned and chopped into small bits. This is then tossed with the sauce of the house. Pulled is all of this juicy pork deliciousness deboned, deskinned and defatted and pulled apart so the fibers of muscle give you long shreds of pork. This is then tossed with the house sauce and served. I prefer shredded, so that is how I make mine.

Now here is a few things about making this in the slow cooker. After cooking for 8+ hours, there will be a good amount of juice and fat that has cooked out and is now stewing in. Save this juice, more on that later. The pork will also not have a smoky flavor to it since it is not cooked over wood. You can add a few drops of liquid smoke if you like a smoky flavor to your 'cue. If you prefer, you can put the meat onto a sheet pan and in a 350 degree oven for about 20 minutes to dry it out a bit, if you prefer a dryer bbq. After pulling the meat off the bone, save the bone to make a bone broth or stock later. DO NOT give it to your dog. Dogs should not have pork bones as they splinter and can lodge in their throats. Save the skin and make cracklins or cut up into smaller pieces and give to the dog (or the kids) as a treat.

Here is my recipe for slow cooker barbecue. 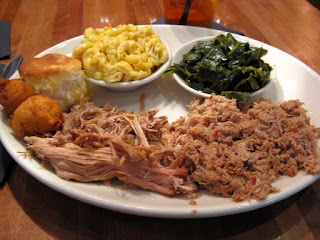 I have also added such spices as star anise, nutmeg, anise seed, chili powder, red pepper flakes, etc.
Mix these spices together in a bowl and rub well all over the roast, getting into all the cracks and crevices. Put roast into cooker on low for 8 hours or until meat easily pulls away from bones. Remove from cooker and process meat as you like (shredded or chopped). Add your favorite sauce and mix well. Serve. Here is a recipe for True NC BBQ as served by  Holy Smoke: The Big Book of North Carolina Barbecue

by Reed. I would jazz it up to suit your taste by adding brown sugar, hot sauce, chili peppers, molasses or whatever you think works for you, but this is a good base recipe.


So what do you do with all of that left over juice from the cooking? I will strain and put it in the refrigerator to cool and allow the fat layer to harden on top. I will take this fat and either clarify it and use it for cooking or just feed a little bit at a time to the dogs. Use the broth to flavor other dishes like beans soups or chili. You can freeze or can the broth to use at a later time.

If you are able to take advantage of a sale on pork roast, you will easily save a lot of money making a pretty good bbq. Around here it costs $7.99 a pound for fresh prepared bbq. If you pay only $2 a pound for raw pork and even with a 30% loss of weight due to the cooking you will still be paying less than $3 a pound for fresh bbq. I hope this helps you make a great meal for your family and don't forget the cole slaw and hushpuppies

This post contains affiliate links.
Posted by Unknown at 8:44 PM