Preserving by canning your food 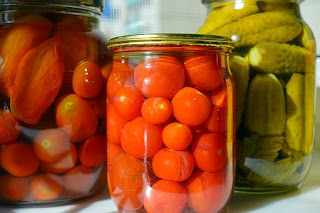 There is another method to preserve your summer bounty and that would be canning.  Canning has had a resurgency in resent years as people have been looking for ways to save money and keep their food preserved to be used at a later time. Some may remember their grandmother pulling out the old canner, a load of mason jars and lids and bands. Mine never did so I had to learn how to can myself and I have been using this method for many years now. I don't can a lot of different items but stick to preserving all of my stock that I make so the family can make fresh soup any time they want. I do occasionally can some extra spaghetti sauce, beans or soup so we can use it later or the kids can have some pasta for lunch. I do find it interesting that we call it canning when we use jars to preserve the food in and not tin cans. I am pretty sure this comes from the fact that  the Ball Jar Company was originally in the tin can making business and branched out into making glass jars.

Canning is not really very difficult to do and in a method I will describe shortly, gets even faster and easier. There are two methods of canning- pressure canning and water bath canning. Which method to use is determined by what you are canning. With pressure canning you are heating the food in jars (specially made, thicker glass jars) under pressure so the steam generated will get the food to a higher temperature and kill any bacteria that will make you sick. Water bath canning puts this same jar under water that is boiling and the heat goes no higher than 212 degrees (since that is the temperature water boils at). Water bath canning is used for highly acidic or highly sweetened foods, such as tomatoes or jams and jellies. Pressure canning must be used for other foods with a low acid level such as meats, soups and the like. 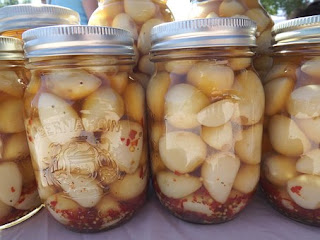 To be sure which method to use, I highly recommend anyone wanting to can to buy The Blue Book Guide

, by Jardan Home Brands. It is called The Blue Book because it always had a blue cover on it and anyone that has canned, is familiar with it. Jardan are the makers of Ball canning jars and this is the bible of canning. It has LOTS of recipes and methods on how to can everything. The book has been in production since 1909 under one name or another and it's procedures for canning are tried and true and if followed properly, will ensure you will not get sick. It is currently in it's 37th edition.

Water bath canning is pretty easy. In general, this is the method- place hot food in hot jars, remove air bubbles, place hot lids on the jar and close with band to hand tight. Place the filled, sealed jars in a pot of hot water so that the water completely covers the jars. Boil these jars for the recommended time (see the recipe in The Blue Book) and remove from the water after this time has elapsed, placing on a dish towel on the counter until the jars have cooled, which will take a couple hours. 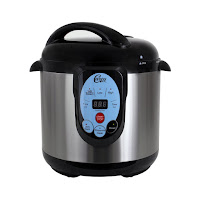 Pressure canning is done almost the same way as water bath except you must use a special pressure canning pot. The hot filled jars are put into the canner with only enough water to go half way up the jars. The lid gets sealed and the pot must boil until the prescribed amount of pressure has built in the pot. Only then do you start to countdown the amount of time it needs to cook. Recently, I heard about a new type of electric pressure canner that I just had to try out. I highly recommend the Cary DPC-9SS Pressure canner

. Having compared it to other electric pressure canners, this is the only one that has a large enough cavity to fit 4 quart sized jars. Once you get the hot food into the hot jars, you basically set the timer on the unit and let it go. It monitors the pressure and the time and you're done. This has actually helped me get a lot more stuff canned since it has made it so much easier to do. It is a far cry from having to adjust the heat from your stove (which is rather difficult with an electric stove) to be sure the proper pressure is maintained. 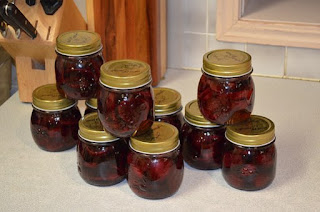 Using the proper jars is essential. They come in all sizes and some have pretty designs on them. You will usually be using pint or quart sized jars for most of your canning. They also come in regular or wide mouth, depending on how big of an opening you need to get your food into the jar. You do not want to use old "mason" jars

(a competing brand of canning jars with Ball) that you find in a thrift store. Using grandma's old jars is good for keeping dried goods in, but not to pressure or water bath can. These old jars could have cracks or chips that will effect the stability of the glass under pressure and cause them to explode. Start out with a fresh case of jars from almost any store. They sometimes have lids and bands

with them to get you started, if you buy a case that has them packed with the jars. Once you have a supply of jars, you can reuse them indefinitely. New lids need to be used anytime to can to ensure they get a good seal. Bands are what hold the lid to the jar and you can reuse these time and again until they start to rust and then they need to be replaced.

This has been a primer on canning and perhaps I will post again, more in depth about the methods and recipes. Again, I recommend that you get "The Blue Book" to get you started. Read up on the recipes it has to give you new ideas for putting away your extra foods to be used later.

This post contains affiliate links.
Posted by Unknown at 9:06 PM